We all know the story of Rapunzel – a witch traps a princess in a tower and she isn’t able to escape until a prince stumbles across her and falls in love, helping her break free from the witch’s trap. You might be wondering why we’re talking about a fairy tale, but it’ll all make sense by the end of the story. 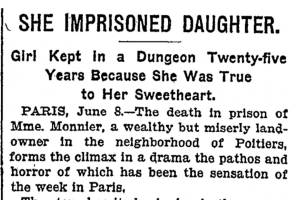 In May of 1901, the Paris Attorney General, received a letter accusing a woman of having had a spinster locked up in her house for 25 years living on what the anonymous note writer refers to as “a putrid litter.” The woman he was accusing of this was a prominent woman named Madame Monnier who was well known in Parisian high society for her work with charities. She had even received an award for her contributions. She had a son who had grown up to be a respected lawyer, and a daughter, Blanche, who had gone missing 25 years before.

I did see some conflicting sources on Blanche’s disappearance. The majority of sources said she disappeared without a trace, but one I came across said that her mother told the townspeople that she had gone to Scotland to attend a boarding school to finish her education. Regardless, at this point the town had moved on and all but forgotten about her. The police were obviously skeptical about this strange letter, but figured they should check it out just to be sure.

When police arrived at the Monnier estate, everything seemed normal… that is, except for a horrible smell that seemed to be coming from the attic. When they reached the attic door, they were surprised to see a padlock holding it shut. This was enough for them to start doubting Madame Monnier’s spotless image. They broke down the door and were overcome with an odor so horrible one of the policemen proceeded immediately to the windows in an attempt to relieve themselves of the stench. They had sat untouched for so long, that they were unable to open them until removing the hinges. Once the windows had been broken and sunlight could get in, they could see what the cause of the smell was. The floor was covered in rotting food, feces, and bugs. There was also a rotting straw mattress, with what police realized was a woman sitting in the filth. She was barely more than a skeleton, weighing only 55 pounds, or 25 kilograms. For reference, that’s about the weight of an average 65 inch TV.

The woman was naked and chained to the bed. She hadn’t even been allowed to get up to use the bathroom and was sitting in her own filth. As you’ve probably guessed by now, the woman police found that day was Blanche Monnier, who had disappeared 25 years before. She had not left the attic a single time in those 25 years, nor had she seen the sun, had a real meal, or been able to interact with anyone. She had been fed scraps from her mother’s meals and essentially been left to rot up there. 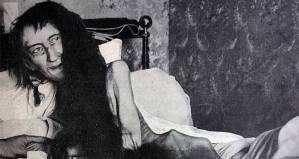 Blanche Monnier in her room in 1901, not long after she was discovered. Wikimedia Commons.

When police realized what they had found, they immediately arrested Madame Monnier and Marcel, Blanche’s brother. Madame Monnier confessed to having trapped her in the attic and died in prison 15 days after Blanche was discovered. Marcel on the other hand, stood trial and was sentenced to 15 months in prison for his involvement. He appealed and was eventually acquitted as he claimed that Blanche could have left at any time, but chose not to.

So now you know how she was found, but what could make someone’s own mother chain them in an attic? And what would it take for them to keep this up for 25 years? Buckle up, because this woman’s thought process is a wild ride.

In 1876, when Blanche was 25 years old, she was your typical socialite. She was described as beautiful, gentle, and good-natured. And like every other single, 25 year old woman at the time, she was looking for a suitor before it was too late. From the time she was a teenager, she had many suitors from the upper rungs of French society, but none of these suitors had been able to win her parents over. In their eyes, none of them were good enough for her. So when she was 25 and fell in love with an older, penniless lawyer her mother was very upset and forbade her from marrying him.

When Blanche refused to succumb to her mother’s orders to find a younger, wealthier husband she decided the best course of action was to lock her daughter in the attic until she changed her mind. Apparently both of these women were very strong willed because this went on for years and neither gave in to the other. So, obviously this is messed up and doesn’t explain or excuse Madame Monnier’s actions, but what’s even crazier is that Blanche’s suitor died in 1885. This was only 9 years into Blanche’s 25 year sentence, and since her original reasoning behind locking her up there was to convince her to marry someone else, I can’t wrap my head around why she wouldn’t let her go at this point. Is there some sort of psychological cause that makes something like that happen? Like, is it because by that point this was just normal for them or was Madame Monnier just that messed up?

So, after the man she wanted to marry died, Blanche remained locked up until that anonymous letter was sent to the Attorney General in 1901. Who knows how long she would have been in that attic had that letter not been sent. No one ever took credit for the letter, but it is said that perhaps one of the servants may have told someone. Although, it also could have been from one of the neighbors who had heard screams coming from the Monnier attic for years, but never said anything because they didn’t want to risk tarnishing the reputation of the family nor did they want to have to deal with the wrath of Madame Monnier.

Whether fortunate or not, Blanche made it out of her prison alive. She was surprisingly lucid when she was rescued and even after 25 years of her own personal hell was just focused on the positive and commented on how wonderful it was to be able to eat and be clean again. She had to reacclimate to sunlight and unfortunately, but not surprisingly struggled greatly with her mental health after being freed. She was diagnosed with anorexia, schizophrenia, exhibitionism, and coprophilia. This caused her to be put in the care of a psychiatric hospital until she passed away in 1913 at the age of 64.

“The Story of the French Socialite Who Was Locked Away For a Quarter of a Century, 1876,” accessed November, 2021,  https://historydaily.org/blanche-monnier-story

“Incredible story of the 19th Century French socialite who vanished for 25 years… only to be discovered locked in her mother’s attic because of her scandalous sex life,” accessed November, 2021,  https://www.dailymail.co.uk/news/article-3300464/Incredible-story-19th-Century-French-socialite-vanished-25-years-discovered-locked-mother-s-attic-scandalous-sex-life.html

“Blanche Monnier Was Kept Hidden In Her Room For 25 Years, Just For Falling In Love,” accessed November, 2021,  https://allthatsinteresting.com/blanche-monnier

“Kidnapping and hostage-taking: a review of effects, coping and resilience,” accessed November, 2021,  https://www.ncbi.nlm.nih.gov/pmc/articles/PMC2627800/

“Christina Crawford on life after Mommie Dearest: ‘My mother should have been in jail’,” accessed November, 2021,  https://www.theguardian.com/society/2019/jun/25/christina-crawford-on-life-after-mommie-dearest-my-mother-should-have-been-in-jail