It all started on the night of February 1st, 2012 around 8pm in a small coffee shop kiosk called “Common Grounds” in Anchorage, Alaska. Now, one of the bone chilling parts of this case is that the encounter I am about to describe to you was captured on surveillance camera and the Anchorage police actually released it and you can watch it unfold. If you’re interested in watching this, you can google it and there are multiple links to it on Youtube. Anywho, 18 year old Samantha Koenig was working alone and getting ready to close up shop when a man in a ski mask approached and ordered a coffee. Now remember, this is February in Alaska. I haven’t personally been to Alaska, but I did live in a small town in Idaho during college and when it was super cold and windy it was pretty normal for people to walk around in ski masks. According to google, February in Alaska averages 23 to 33 degrees fahrenheit or -5 to 1 degree Celsius. So with this in mind, it could totally be commonplace for Samantha to take orders from people in ski masks, especially when the sun has set hours before. 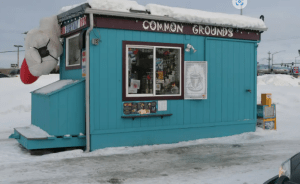 So, in the surveillance video, she doesn’t seem alarmed by the fact that he is wearing a ski mask. She turned around to make the man’s coffee and when she went to hand it to him was surprised when he had a gun pointed at her. You can then see her turn the lights out, open the register, and hand him money. With the lights out it is difficult to see what exactly is happening, but the man ends up climbing through the opening and zip tying Samantha’s hands behind her back. He asks her where her car is and she tells him that she shares a truck with her boyfriend who currently has it. You can then see him walk her out of the shop and as they exit she tries to make a run for it. You can’t see this part very well, but according to reports, he chases after her and tackles her. He then puts one arm around her and uses his other to point a gun at her. He walks her through the parking lot to his truck. Now, one of the things that blows my mind in this case is that you can actually see another car with its lights on in the video at this point. But the man was smart and told Samantha to act drunk, stumble around a little, and lean against him. At this point, she thinks her best bet is to do as he says, so she does. The car ends up driving away and he binds Samantha in his truck and drives away. Now, you may be thinking, if this is all on camera, we can easily identify this man, or at least his vehicle. But that would just be too easy. The man clearly knew what he was going to do that night and had taken the plates off his truck making identifying him a lot more difficult.

After they drove away, the man then explained to Samantha that he just wanted money and that if she cooperated she would get to go home soon. He wanted her cell phone and debit card, but was disappointed when he learned that the cellphone had been left at the coffee shop and her debit card was in her truck, which as we already established, was with her boyfriend. You might be thinking that he would just give up at this point, but this dude is persistent. He knew what he wanted and he was stupid, arrogant, or maybe both, and decided he was going to make this work no matter what it took. He literally went back to the coffee shop for her phone, leaving her in the car, and used it to text her boyfriend and her boss that she had a bad day and was going out of town for the weekend so that they wouldn’t be concerned about her. Then he took the battery out of her phone.

So now he has Samantha and her phone, but he still has the issue of her debit card. He decides to take Samantha to his property and ties her up in a shed that is in front of his house and gets her home address so that he can retrieve her debit card and it’s pin so he can use it. He turned the radio on so that no one would hear her if she yelled for help and informed her that he had a police scanner, so he would know if she tried to get help and would come back if he heard anything on the scanner. He then leaves her in the shed and heads to her house.

When he arrives at her house he breaks into the truck and is spotted by Samantha’s boyfriend who yelled at him and went inside to get help thinking it was just a random burglary. Unfortunately, when her boyfriend went inside, the man got away. On his way back to the shed, he stops by an ATM to test the pin Samantha had provided him with and was pleased that it worked. At this point, he returned to the shed and raped Samantha.

The next morning, Samantha was reported missing. While the man had texted her boyfriend and boss, her family felt it wasn’t like her and they felt like something bad had happened. More than 2 weeks went by and even the FBI got involved, but there were no leads for weeks. Then, on February 17, the man took a picture of Samantha with a newspaper dated February 13. Then, he took a copy of that picture, a note he typed up using a typewriter demanding a ransom of $30,000 and texted Samantha’s boyfriend once again. In the text, he directed him to where he could find the ransom note and waited for his payday.

Samantha’s family didn’t have much money, but the community rallied behind them and were able to get the money he had demanded. They did as he directed, putting the money into the account connected to Samantha’s debit card. The police figured that they could catch the man by tracking the card and that they would be able to locate him when he made a withdrawal. The downside to this method is that there was a delay in him using the card and the police officers getting to the ATM he had used, so as he used the card at different ATMs, they were continuously minutes behind him.

He kept using the card though, and they tracked him as he made his way through Alaska, Arizona, New Mexico, and Texas. While he wore a disguise at the ATMs to avoid being identified by the cameras, they were able to identify that he was driving a white Ford Focus. In Texas, a man named Israel Keyes was pulled over for speeding by Corporal Bryan Henry and Texas Ranger Steve Rayburn. He was driving a white Ford Focus, like the car they were on the lookout for, and had an Alaska license. They were able to gather enough information to perform a search of his vehicle. In it they found both Samantha’s phone and her debit card, but no Samantha.

This is because he had actually killed Samantha the same night he abducted and raped her. Now, if you remember, the shed he took Samantha to was in front of his house. What I didn’t tell you before is that it wasn’t just him that lived there, in fact it wasn’t even his house at all, but his girlfriends. He also had a daughter who was in the house while all this was happening (some sources say the girlfriend was in the house as well, others say it isn’t confirmed whether the girlfriend was there or not). Anywho, he and his daughter left the next morning (February 2nd) for a two week cruise. Now, you’re probably thinking hold up, what about the picture he took for the ransom note? If the newspaper in the picture was dated the 13th of February and she was alive in the picture, how does this add up if she had been dead for two weeks? This is where it gets really disturbing and if you don’t want to hear gory details or have little ears around, you might want to skip ahead.

Here’s how it went down. After he verified the debit card worked with the pin Samantha had provided him, he went home and checked on his daughter who was asleep. At this point, he went back to the shed and raped Samantha before choking her to death. He then went back to the house and had left for the cruise with his daughter in a cab at 5 am. Since it was February in Alaska, he was able to leave her body in the shed the whole time he was gone without decomposing. So when he wanted to take the picture for the ransom note, he took her body and to make it look like she was still alive, he put makeup on her and sewed her eyelids open with fishing line.

After taking the picture he dismembered her body and took it to Matanuska Lake where he dumped the pieces into the water through a hole in the ice. He was able to do this without anyone noticing because ice fishing is common in Alaska when the lakes are frozen over, so if anyone was passing by they wouldn’t have anything to be suspicious about. FBI divers were able to recover Samantha’s body on April 1st.

Once Israel Keyes was caught in Texas, he quickly admitted to what he had done and revealed a lot more information no one had been expecting. He was taking responsibility for a lot more than just Samantha Koenig. There’s a lot to unpack about what unfolded after he was caught, so we’ll dive into that next week.

“A chilling look inside one of America’s most infamous serial killer cases,” accessed November, 2021, https://nypost.com/2019/06/29/a-chilling-inside-look-at-one-of-americas-most-infamous-serial-killer-cases/