Dorothy Jane Scott was a 32 year old single mother from Stanton, CA when she went missing on May 28th, 1980 (a couple sources say May 27th, but the majority say the  28th so that is what we are going with).  She had dropped her son, Shanti (who now goes by Shawn), off at her parent’s house so they could watch him while she went to a work meeting. Her parents lived close to where she worked, so they would watch him for her when she needed help.

While at the meeting, she offered to take a coworker named Conrad Bostron to the  E.R at  UC Irvine Medical Center. Another coworker, Pam Head, offered to come along as well. Now, sources vary when explaining why they made this trip, but it was either because he was in an immense amount of pain, because Dorothy had noticed a strange raised bite and looked unwell, or some combination of the two. I personally lean towards the latter because before going to the hospital, she stopped back by her parent’s house to let them know what was going on and that she would be late picking up Shanti and I don’t feel like she would have done this if he was in loads of pain. I do want to note that while she was there she changed her scarf. She had been wearing a black scarf, but  switched it  out for a warmer  red scarf. We’ll talk about why this is significant later, but keep it in mind.

Once they got to the medical center, it was determined that Conrad had been bit by a black widow spider. While he was getting treated, Dorothy and Pam sat in the waiting room together. By11 pm he was starting to recover so he was given a prescription to get fill and was discharged. Dorothy offered to go get the car from the parking lot while Pam and Conrad waited for his prescription. She stopped by the restroom and made her way outside. Once Pam and Conrad had his prescription, they went to the entrance expecting to see Dorothy and her car. I couldn’t find any pictures of the medical center at the time, but I imagine it was like most hospitals are set up now with a separate little area up front for easy pick up and drop off.

So after waiting for about 10-20 minutes, they finally saw Dorothy’s car heading toward them. The problem with this though, is that it didn’t look like it was going to stop for them. The headlights blinded them and they couldn’t see anything, but waved their arms trying to flag her down. When she didn’t stop, they thought that maybe there had been an emergency or that she went to quickly check on her son and figured she would be right back. But after a couple of hours had passed, she still hadn’t come back or contacted them. They used the hospital phone to call her parent’s and see if she had picked up Shawn or contacted them at all. She hadn’t and so not knowing what else to do, they called the police to report her missing. 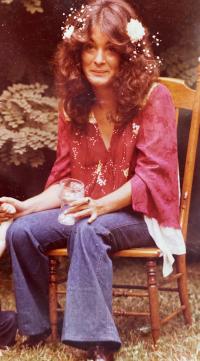 Since she was an adult, the police weren’t really concerned and brushed them off, assuming she would show up eventually. This attitude didn’t last long though. By the time 4:30am rolled around, her car was found abandoned and on fire in an alley about 70 miles or 76 km away from the hospital. The police quickly changed their tune and opened an investigation. This is when they realized there was a lot more to this case than initially met the eye (is this the right saying?). Dorothy had spent the last several months dealing with a stalker. He called her constantly and there was more than one occasion where he talked not only about his love for her, but how  he planned to murder her. In one of these calls, he told her to look outside to see the  gift he had left her. This “gift” was a dead rose on the hood of her car. In another call he said to her, “When I get you alone, I will cut you up into bits so no one will ever find you.” I don’t know about you, but when I love someone I don’t fantasize about cutting them up into tiny pieces and a dead rose would not be the first thing to come to mind when trying to think of a gift to give them. Is this just a sick and twisted guy or is there something more behind this?

Anywho, these calls were obviously terrifying and Dorothy was taking measures to try and keep herself safe. She had filed police reports, considered buying a  handgun, and had even started taking karate lessons. She was clearly doing everything in her power to keep herself safe. Now, keep in mind that this is taking place in 1980 when stalking was not taken as seriously as it is now. We didn’t have the knowledge base we have now that tells us things like how many women are victims of stalkers before being murdered or the statistics on stalkers that escalate. I might reword this sentence – trying to get it to flow a bit more. Jumping back to the case, about a week after Dorothy had gone missing, her mother, Vera, started receiving calls from an anonymous man. The first time he called he asked if she was related to Dorothy Scott. Vera replied “yes” and the man said, “I’ve got her,” then hung up. So as if the Scott’s weren’t already going through enough, they were now being taunted as well.

When they told police about the call, they were told to stay quiet and not contact reporters about it while they initiated a search as it could negatively affect their investigation. This didn’t last long though, as after a week had gone by with no progress, they ran out of patience and Dorothy’s dad, Jacob, reached out to the Santa Ana or Orange County Register newspaper, depending on sources. They ran a story about her disappearance and the same day they ran it, the editor for the newspaper, Pat Riley, was the next to receive a call. In the call he said, “I killed Dorothy Scott. She was my love. I caught her cheating with another man. She denied having someone else. I killed her.” He also brought up information about the case that had not been released yet. He knew about Conrad’s spider bite and also about Dorothy’s red scarf. Now, if you remember, I said this would be important earlier. She had been wearing a black scarf all day and only put the red scarf on after leaving work to take Conrad to the medical center with Pam. This means that he must have seen her since then, so it is pretty safe to say that he was responsible for whatever had happened to Dorothy.

He continued calling the Scott’s every week, on Wednesday afternoons. He always called when it was just Vera home and would say things about having Dorothy, killing Dorothy, and so on. This went on for 4 years until one Wednesday he made a mistake. He called later in the day and Jacob picked up. This must have spooked him because for the first time, the calls stopped for a while. So, you might be thinking, if he was so consistent why couldn’t the police catch him? They did try tracing the calls, but he never stayed on the line long enough. So not only has this man taken their daughter, but he has continued to torment them for years all while they don’t get any real answers as to what has happened to their daughter.

On August 6th, 7984, more than 4 years after Dorothy had gone missing, a construction worker discovered human remains in the brush on Canyon Road on Santa Ana. They found a human skull, pelvis, two thigh bones, and an arm. The bones were slightly charred which led authorities to believe they had been there for at least two years as a bushfire had swept across the area in 7982. They were confirmed to be Dorothy’s through her dental records. An autopsy was done, but a cause of death was never determined.

With the human remains they found a couple other things. There was a turquoise ring that Dorothy’s mother identified as hers, a watch, and the remains of a dog. The watch had stopped on May 29th, 7980, at 12:32 am. This is only about an hour after Pam and Conrad last saw her. Of course a broken watch doesn’t necessarily mean she was already dead by then, but do with that what you will.  So who could have done this to Dorothy? Unfortunately, we don’t know as the case remains unsolved. As far as theories go, we all know that the first person everyone jumps to is the significant other. Now, as far as anyone knows Dorothy wasn’t seeing anyone despite what the man on the phone said about her cheating on him. Shawn’s father was also looked into, but had an airtight alibi and was eliminated as a suspect pretty quickly.

There is one theory that is pretty widely accepted by friends and family of Dorothy, but has never been proven. They believe it was a man named Mike Butler. He had a sister that worked with Dorothy and it is said that he was obsessed with her. He lived in the nearby mountains and it was rumored that he was unstable and possibly even involved in cult activities. Butler  had run into Jacob Scott before, so people speculate that he hung up when Jacob answered the phone because he was worried he would recognize his voice. He also would have access to her schedule through his sister as well as an excuse to hang around at times. Some people even think they can explain the dog through this theory, supposing that it had something to do with cult practices. While it seems like a viable theory, there was no hard evidence and Butler was never arrested or even named a suspect.

At this point, Dorothy’s case has gone cold. Her parents passed away in 1994 and 2002. Her son Shawn believes it was Butler. If it was, he’ll never get to see him tried for it as he passed away in  2014. If it wasn’t  Butler, someone is walking around having gotten away with murder.

“Dorothy Scott Murder: How Did She Die? Who Killed Her?,” accessed November, 2021, https://thecinemaholic.com/dorothy-scott-murder-how-did-she-die-who-killed-her/

“The Unsolved Murder Of Dorothy Scott And The Mystery Stalker Who Taunted Her Family For Years,” accessed November, 2021, https://www.buggedspace.com/the-unsolved-murder-of-dorothy-scott-and-the-mystery-stalker-who-killed-her-and-taunted-her-family/

“In the Mind of a Stalker,” accessed November, 2021, https://www.psychologytoday.com/us/blog/talking-about-trauma/201306/in-the-mind-stalker