Today we are talking about the disappearance of Daniel “Danny” Barter. Daniel is one of the individuals on the FBIs list of missing children that we talked about a few weeks ago. We don’t have a ton of information, but I still wanted to talk about his case – just because there isn’t much information doesn’t mean he doesn’t deserve to have his case talked about. So let’s jump in.

Daniel was born December 12, 1954 in Mobile, Alabama. (Danny’s mom was a homemaker & his father was a stockroom mgr for Morrison’s Cafeteria in Mobile.) On June 16, 1959, he was camping with his family at Perdido Bay. This is about an hour away from where the family lived. The family he was with were his parents Paul and Maxine, three of his six siblings (Steve 11, Ronald 10, Bobby 8), Paul’s brother Jim, and Jim’s son Runeau. Two of his other siblings (Theresa and Michael) stayed with Jim’s wife, Vera. He had one other sister, Wanda, who was almost 13, and she was spending the whole summer with her grandma, Maxine’s mom. (My understanding, is at the time, unbeknownst to them, Danny’s mom, Maxine was pregnant w/ her 8th child – Tony) They weren’t camping just for fun, they were actually there to help clear land for a beach house they were wanting to build, according to an interview with Wanda from 2008. The land they were on was owned by Jim, so it makes sense that he would have gone with the family.

(On the morning of the abduction, Danny went with one of his parents and brother to a store in Lillian to buy snacks, drinks, and some food to make breakfast. There are conflicting reports as to which parent went. Most reports say it was Danny’s mother, but in an interview done in 2008, his mother is quoted as saying it was Paul who went with Danny to the store. When they returned to the campsite, Maxine made breakfast, while Danny’s father, Paul, played with the children.) On the morning of June 18, between 9:30 and 10:00, the campers were preparing to go fishing when Daniel, who had been standing by his mother with a Nehi soda, wandered off. Note: one source says this was the 17th, but the FBI missing persons report says the 18th, so that’s what we’ll go with. She was untangling a fishing line and when she looked up, he was just gone. She immediately looked for him and when she couldn’t find him after 10 minutes, she ran to a nearby house and called the police. At this point he’s been missing for no more than 25 minutes, so it’s all moving very quickly. (I can only image the panic that was building the more time that went by.) 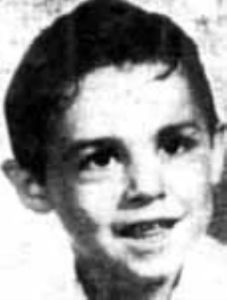 Fortunately, police took this seriously and immediately took action. And when I say they took action, I mean they took action. On findagrave.com, they explain what the search consisted of and I’m just going to read that so you can see the level to which they went. “Over 2,000 people helped in the search for Danny, including more than 300 sailors and Marines from nearby military bases and 150 law enforcement officers and firemen. Civilian volunteers in bands of 25 teamed together and walked almost shoulder to shoulder over a 5 sq mile radius through woods and swamps in search of Danny. A skin diver volunteered to search the bottom of the bay for Danny. As a last resort, dozens of water holes were dynamited in an effort to bring up a body and 2 large alligators in the area were hunted down and killed so stomach contents could be examined. (I suppose given his age, there was no hesitation, because it’s not like he would have run away, like is commonly attributed to missing teens by police.)

Law enforcement officials from Alabama, Florida and other states, using boats, fixed-wing aircraft, helicopters, jeeps, horses and champion bloodhounds combed a five-square mile area in a search that lasted for more than a week before it was finally and reluctantly called off.”

(When the search was called off, this must have been so upsetting to Danny’s family. In the 1950’s there were no Amber alerts, limiting the number of law enforcement departments that were likely notified, or possible witnesses who could have seen Danny on roadways, if in fact, he was kidnapped. The Perdido Bay was very near local highways and at least 1 major interstate that connected AL to FL. So, it could have made for an easy getaway.)

Something important to keep in mind too is that according to Maxine, Danny didn’t like the water so she didn’t think it was likely that he would have gone into the water voluntarily. Additionally, the bay was very shallow and you’d have to go a considerable distance to even really get wet. They also say he was barefoot and only wearing a pair of shorts and since the undergrowth around the campsite was thick and prickly it wouldn’t have made sense for him to have gone into the bushes either. (This is true about the bay, it was only about knee high near the shore, and as you went further out it gradually increased to about 7ft. Also, there were no footprints found on the beach, and the areas surrounding the campsite would have been difficult for him to walk barefooted. Think about it, rocks, branches, bristles, all of these things are not foot friendly.)

A 5 year old could only get so far in such a short period of time on their own, so they did consider the possibility of him being abducted. There were a few things that gave some credence to this theory. For one, they never found any trace of him even with all the searching – they never even found the soda bottle he’d had. (This is strange, and to me could indicate he was coaxed into going with somebody, as opposed to grabbing him violently and him dropping the bottle.) There was also an incident about a month before the camping trip where Maxine had seen a mysterious vehicle parked outside their home in Mobile. It had made her uncomfortable, so she went to approach the vehicle, but as she got closer he put a newspaper up to his face so she couldn’t see him and then drove away. (Ironically, his mother was concerned about the man in the vehicle because a lot of young girls lived in their neighborhood, but it was ultimately her male child that went missing. Not saying that the man in the car took him, but just illustrating the irony in her thought process.)

Another strange occurrence happened one evening when a neighbor’s dog took off barking and ran towards the Barter’s house. When the owner went after their dog, they saw a man peering into the boys’ bedroom window. And yes, they were currently in the room asleep. The neighbor ran to alert Maxine, but the man fled. They did file a report with the police who found clear footprints outside the window and made casts of them, but it doesn’t seem like anything ever came of that. (I guess it was a good thing the neighbor’s dog scared off the peeper, because who knows what could have potentially happened otherwise.)

As if these two things weren’t concerning enough, there was yet another incident when Maxine took Danny and one of his brothers to the grocery store. She left the two of them in the car while she went in and when she returned, Danny’s brother told her that a man had pulled up beside them and stared intently at the boys before driving off. This was just one day before Danny went missing. (I read about this as well. I suppose we have to remember this was the 1950’s, and not that bad things didn’t happen, as we are discussing the disappearance of Danny now. But, it was at a time when more often than not, people could leave their children in a car, outside of a store, without worrying someone would kidnap them. Also, it would not have been uncommon for doors or windows to have been unlocked, either in a car or residence at this time. Which makes the individual staring through the boys’ window all that more concerning.)

Obviously, this is a lot of suspicious stuff and I would want to know if it was the same vehicle type or if they could compare the incidents to one another to see if they were related, because I definitely think it’s too much to be coincidences. While all of this seems promising, nothing ever came of it and the case went cold.

In 2008, almost 50 years after Danny went missing, the police received a tip that caused them to reopen his case. FBI spokeswoman Joyce Riggs wrote in an email to the media, “”A lead was sparked when someone was sitting in a public area talking about what happened.” Someone overheard this conversation and reported it which is exactly what you should do if you hear something like that. So often, people brush things like that off, but for all you know it could be the information that breaks a case. It’s always better to report it just in case. (Maxine, in an interview that was published on June 21st, 1959, by the Mobile Register, told the reporter, “He’s such a very pretty & sweet child. I can understand why someone would want to take him, because he’s such a pretty child.” And, she also “hoped that someone did take Danny…because if anyone wanted him bad enough to kidnap him, they would take good care of him.” Even 50 years later, Danny’s family believes he is still out there. On the now defunct website, DannyBarter.com, they had posted to the public, “We strongly believe that someone out there knows what happened to Danny and possibly knows him as another identity. We hope to find him safe and sound.” They even uploaded DNA to a national missing person database hoping it would trigger a match. To my knowledge, it never has. They even considered the hiring of a medium to assist in their search, but were unable to afford it. Both of Danny’s parents are now deceased, as are a couple of his siblings. But those that remain are still very involved in finding their brother.) Cold case investigators believe that there is still potential to find out what happened to Danny. If he is still out there, he would be 67 years old. He had brown hair, brown eyes, scars on his fingers from an accident where he stuck his fingers in a fan, and a scar on his tongue, from having almost bitten through it, the result of an accidental fall. (Please also take a look at the age enhanced photos of Daniel Barter on our website & Instagram) If you do have any information about his case, you can contact the Baldwin County Sheriff’s Department at 205-937-0200 or 251-972-8589. The Mobile FBI field office at 251-438-3674. You can also go online to http://www.fbi.gov/wanted/kidnap/barter-daniel and submit a tip anonymously. 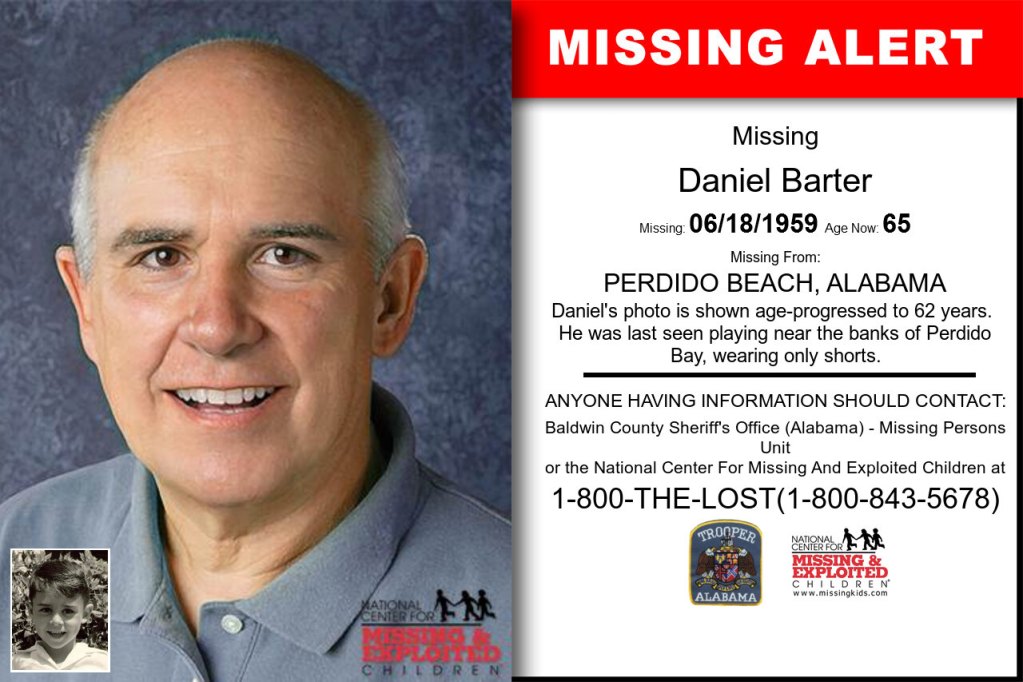