If you guys remember, in our episode on Andy Atkinson and Cheryl Henry last week, we briefly mentioned a possible connection to Tara Breckenridge. We gave you a little bit of information about her case, but I felt like she deserved her own episode.

Tara was born September 30, 1968, and grew up in Del Rio, Texas. She was the third of five children in a devout religious family. She graduated high school in 1987 and moved to Houston to pursue a career in photography. Unfortunately, photography isn’t very lucrative for a newcomer and she had to find a way to supplement her income, so in 1989 she got a job waitressing at the Men’s Club. Her friends and family were all understanding, but her boyfriend, Wayne Hecker, who she also began dating in 1989, wasn’t very pleased about it. Despite him being unhappy about her job, the two of them moved in together and appeared to be happy in their relationship. In July of 1992, she took a trip home to visit her parents. During this visit, her parents felt like something was off, but she didn’t say anything and they didn’t press

Just 2 weeks later, on August 3rd, it was a slow night at the club and the manager decided to send two waitresses home early. Tara’s coworkers were surprised when she volunteered. They said it was really unlike her as she typically was the one to stay late and try to get as many hours as possible to make more money. She changed out of her work clothes and punched out at 12:29am. When she left, she walked past the doorman and didn’t say goodbye in response to him which was also unlike her. The club’s security guard took her tote bag and escorted her to her car. She drove away and was never seen again. 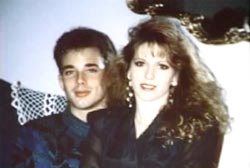 She wasn’t seen, but her car was. Wayne, her boyfriend, had gotten home around 5 am and when she wasn’t there, he and a friend went out to look for her. They found her red, 1986 Pontiac Fiero at about 7 am, abandoned near the 1200 block of West Loop North near 12th Street, on her route home. It was locked and had a can of mace inside laying on the console space between the 2 front seats, in plain view. Something else that was strange about the scene was that the alternator belt was missing. This could just be a red herring, but I feel like it means something. I could be wrong because I admittedly know next to nothing about cars, but I don’t think a car can be driven without an alternator belt. Jennifer, Tina do you guys know anything about this?   I’m curious if you could drive a car for a few miles without an alternator belt.

Maybe someone had removed the belt knowing it would cause the car to break down and was using this to purposely leave her stranded so that they could have access to her.

If course, the first person police tend to look at is someone’s significant other. In this case, that person is Tara’s boyfriend, Wayne Hecker.

If you ask me, her wanting to leave him is a promising potential motive. According to Wayne, at the time Tara had left work, he was 15 minutes away at a pool hall. Police checked his alibi and the pool hall staff had a bit of a different recollection than he did. They said that he left the pool hall between 12 and 12:30 and didn’t return until 1:45.

Like I said before, the pool hall was about 15 minutes from the club. Her car was found 3 miles from the club – halfway between the two locations. He would have had more than an hour to kill her and dispose of her body. I’d say it’s definitely possible. The only thing that this theory doesn’t answer is where her body ended up. An hour is definitely enough time to kill someone, but to get rid of a body for it never to be found again? I don’t know.

We have a bunch of circumstantial evidence against Wayne, but nothing substantial, so he was never charged. 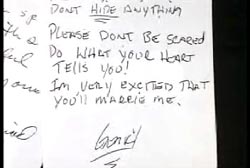 One of the love notes written by a customer (source: https://unsolved.com/gallery/tara-breckenridge/)

Another theory that was tossed around was an admirer who left her tips at work of $100 or more and left her love letters. One note said, “Do not be scared. Do what your heart tells you. I’m very excited that you’ll marry me.” There was another one that said, “The more you hold out, the longer you jeopardize what I feel for you.” These were definitely enough to cast suspicion on the admirer, but police interviewed him and quickly ruled him out. They said that there was nothing threatening in any of the notes and that he was just an individual that had an attraction toward Tara and nothing more.

Another man who was viewed as a possible suspect was Robert Beaty. He contacted friends and family of Tara, sometimes going so far as to claim that he was a police officer. He would make claims that he was about to make an arrest, and he even contacted media outlets informing them of an upcoming search. Of course, this search was never a thing and he never showed up. He was arrested for impersonating a police officer and police found handcuffs, a BB gun, and detective magazines at his house. After he was arrested, he told the police that he had a feeling the person responsible for Tara’s disappearance was a cab driver and “detective wannabe.” Interestingly enough, he himself was a cab driver and we can assume based on his actions and those magazines at his house that he was a detective wannabe as well. Now as fishy as Beaty was, Tara’s family never believed he was involved and he was never charged or officially listed as a suspect.

As we mentioned last week, there has been discussion of Tara’s case possibly being related to Andy Atkinson and Cheryl Henry’s murders.

Tara’s case was featured on an episode of unsolved mysteries in 1995 and despite getting quite a bit of attention, no real progress has ever been made and she has never been found. Tara’s parents and two of her siblings have passed away and Wayne died in October of 2015 of cancer. Of course, it’s possible that she could still be alive somewhere out there, but her remaining family believes that she is deceased.

The most important person to remember here is Tara. She still remains as a missing person, after almost 30 years, with virtually no new information on her case. At the time of her disappearance, Tara was 5’ 5” and 120 pounds. She had a small scar under the left side of her lower lip, a scar under her left arm, and a scar on her left side. As always, we will post a picture of her on our social media and if you have any information about Tara Breckenridge, you can contact the Houston Police Department at (713)-308-3600.