This week, we are talking about the murder of Kate Bushell. I chose this case because I’ve been surprised by the number of UK listeners that we have, so I wanted to cover a case that took place there. From what I’ve seen, this is one of the UK’s largest unsolved cases and was Devon and Cornwall police force’s most complex and extensive investigation, costing the region half a million pounds.

On Saturday November 15th, 1997, Kate Bushell was a 14 year old who went to St Thomas High School. She had an older brother, Tim, who was 15, almost 16. Her father, Jerry, was a retired government officer. I couldn’t really find anything out there about her mom, Suzanne.

It was about 4:30 when Kate went out to walk her neighbor’s dog, Gemma. In case you’re wondering, Gemma was a Jack Russell. This wasn’t unusual as her neighbors, Stuart and Alison Smith, were away on holiday. They had asked her to keep an eye on Gemma while they were gone and this was something she would regularly do for them as a way to make a little money. She headed over to the neighbor’s to fulfill her dog sitting duties at 4:30 pm.

Kate’s parents started to worry when 5 o’clock rolled around as she wasn’t usually gone for more than about 20 minutes. Their concern continued to grow as the minutes passed by, and by 6:45 her dad, Jerry, went to look around. He drove the route he expected her to have taken on her walk with Gemma and didn’t find anything. At this point, they contacted the police to report her missing. While Jerry was doing this, Kate’s mom, Suzanne, stayed back at the house in case she came home. 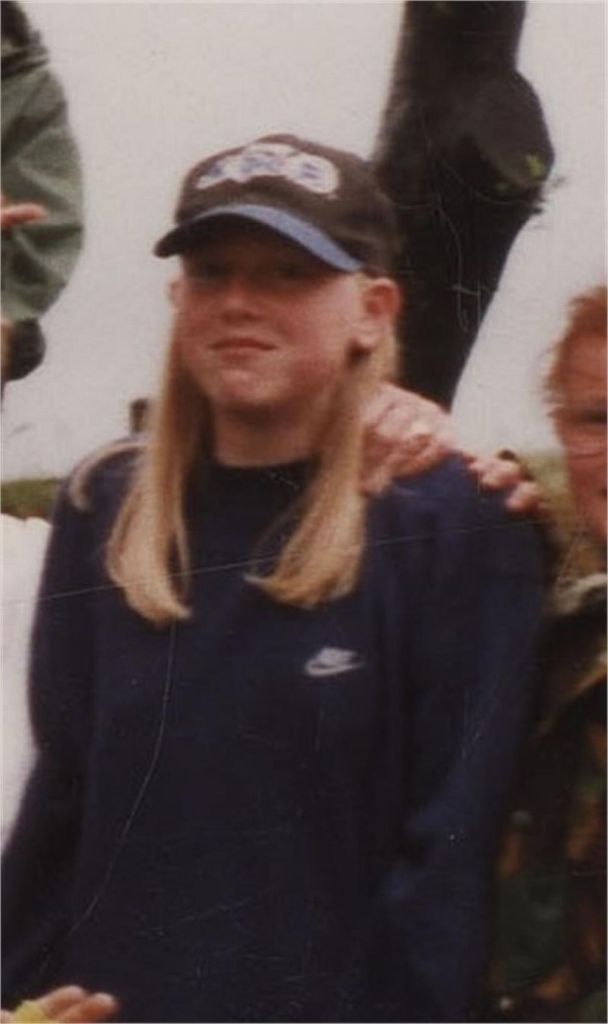 Jerry continued to look for Kate, as he didn’t know what else to do. This time, he went out on foot and borrowed a torch, which is a flashlight, from a neighbor. There was a field off of the path she would have been on and as he was walking by he saw something catch the light from his torch. You know when it’s dark out and an animal’s eyes catch the light and glow? That’s the image he was faced with. The glowing eyes were none other than the neighbor’s dog, Gemma. Gemma then started walking back into the field and Jerry followed. He followed her pretty far into the field and at this point was about a 10 minute walk from the house. Gemma had led him to his daughter and he was faced with her lying on her back, her throat covered in blood with a large slash through it. Her pants were also pulled down to her knees, but there were no signs of sexual assault. This all happened over a short period of time, so it has been speculated that there was possibly an intention of sexual assault, but the perpetrator was interrupted and ran away before he could “finish the job.” Since the place she was found was open, easily accessible, and regularly frequented by dog walkers, the police initially thought this could have been a crime of opportunity.

While it was speculated it could be a crime of opportunity, the police also said that they believed her murder was planned and that the attacker had used great control and ferocity. The police believed it was someone that was familiar with the area and had a local connection based on the location of the murder. The area is a completely isolated rural spot used as a cut through primarily used by dog walkers. So I guess the question is was someone out there with the plan to kill someone and Kate just happened to be the individual they chose or was it specifically her they wanted to kill?

It is interesting they talk about control and ferocity, because maybe she fought and his lack of control in what was intended to be a rape turned into him having to murder her and run before he was detected.

There were 3 main leads in the case. The first was from a mother and daughter who had been driving down the road at about 4:50 that evening. As they drove up the road, they had seen a blue Astra van or car pulled off to the side with a man looking in the boot, which we know as the trunk. They also saw a girl walking with a dog who they later identified as Kate and Gemma. We can be pretty confident in this sighting as the mother and daughter had seen her face and were also able to describe the pants she was wearing. Just five minutes after passing by them, the mother and daughter headed back down the road. The car was still there, but the man was nowhere to be seen… and neither was Kate. The man was described as a white man, 30-40 years old, medium build, average height, with collar length dark hair, clean shaven, and wearing jeans.
Another witness saw a man running along a field from the direction of where Kate was found between 5:10 and 5:40. According to this witness, he “appeared to be running out of control and very fast down the muddy slippery hill before turning back into the estate. He wasn’t wearing a normal running kit and was in an area at a time of night that you wouldn’t expect a jogger to be.”

As if this wasn’t enough, more witnesses came forward with reports of a “weird looking man” who jumped out of the bushes a few weeks before Kate’s murder. This man was described as a white male, scruffy looking, aged around 30 to 40, with salt and pepper unkempt hair and of course unshaven with a large build with a brown checked overcoat and black boots.
The police appealed for someone to come forward and identify him and even asked people to ask themselves if someone came back home disheveled, muddied, possibly bloodied, or out-of-breath. Or maybe if someone disposed of clothing around that time.

While these three leads were the most notable, there were way more reports that rolled in after Kate’s murder. The police had started canvassing and there was so much information that came in from this that a team of almost 150 officers sifted through over 4500 calls and 4400 house to house inquiries. This team worked tirelessly and ended up having nearly 4000 statements to review and also took over 5000 fingerprints. They also tracked down, traced, and eliminated about 2000 blue vehicles similar to the description from the eyewitness.

Not only was this team fielding thousands of tips, they also ran a massive search for the murder weapon around the field where she was found as well as surrounding fields and lanes. Unfortunately, this search wasn’t successful and the murder weapon still hasn’t been found to this day. On the 20th anniversary a few years ago, the police released a picture of a kitchen knife that they believe is similar to the weapon used on Kate in an attempt to generate new leads. Of course, we’ll post this picture on our socials as always. 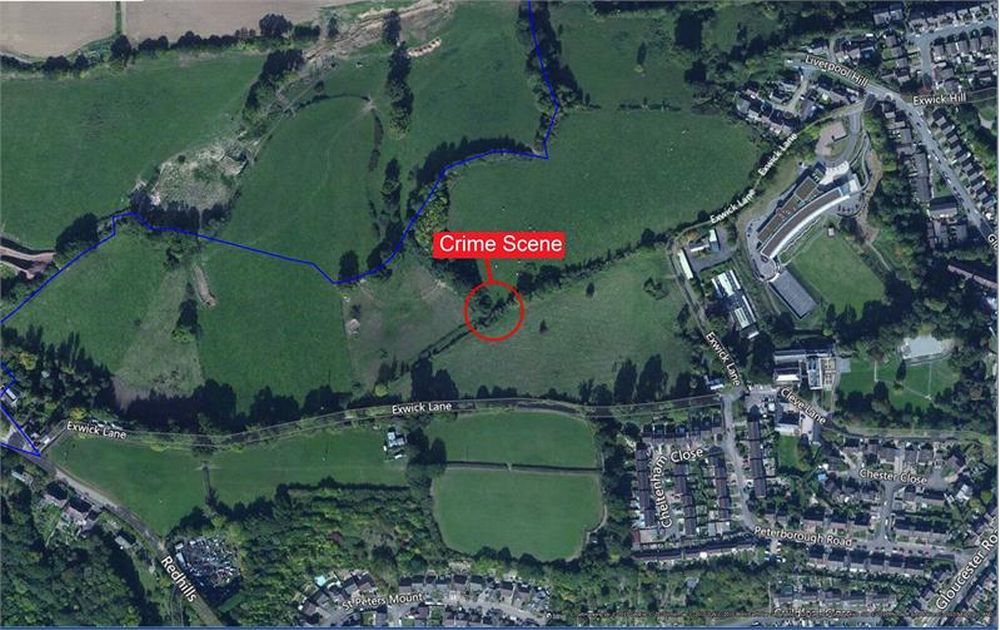 Not only do we have all these leads from the canvassing, we also have some forensic evidence from the scene. They found over 100 orange fibers on Kate’s clothing and body. They also found more on a stile, which are steps for people not animals to climb over a fence or wall, close to where her body was found. These fibers were determined to be completely alien to Kate and her home, and they were “almost certainly deposited there by her attacker.” The police have said that over the years a bunch of work was carried out on the fibers and they appear to be pretty unusual. They said that they were made of a bright orange azoic dyed material predominately used in non-florescent workwear such as boiler suits, aprons and gloves and noted that the murderer might not necessarily have been wearing the clothing that they came from at the time of the murder.

Even with all this information, the thousands of leads, and evidence, the case is still unsolved to this day. In 2017, as the 20th anniversary of her death was approaching, Kate’s older brother Jeremy spoke out for the first time about her death. He said “Reliving it and speaking about it have brought up quite a few memories and visiting the site again with the police the other week did as well.” He continued, “It is very hard to relive those feelings because they were so difficult and completely changed my life and my family’s life from that day. I think when you have got anniversaries coming up they are quite poignant and bring up memories you’ve had before. Things have got easier as you have got on with life over the years but anniversaries bring up painful memories.” He then made an appeal for anyone who had information about his sister’s murder to contact the police.

Kate’s best friend, Nicky Johns, also spoke out at this time. She said, “It’s so strange to look back now and lots of things remind me of Kate and what happened. It is difficult to think about it knowing that this person was never caught so you don’t get closure. I remember the night in great detail. I just remember feeling completely numb. I didn’t cry, I was just in shock, sitting there kind of not believing what I had been told. “I think the hardest thing is knowing this person hasn’t been caught, that they are not paying for what they did. It would mean everything and I just pray that somebody can remember something and can come forward with some information.”

On the 20th anniversary, retired Detective Superintendent Paul Burgan spoke about the case, saying, “It has never gone away, we’re still conducting enquiries to this day and we’re desperate for a member of the public to come forward with that critical bit of information that will hopefully break open the case.” In his statement he also said, “Any murder investigation is like trying to piece together a huge jigsaw, we’re still missing that one piece of the jigsaw. I’m convinced that somebody out there has got that relevant information. Please come forward and give us that vital breakthrough.”
I read somewhere that 11 months after Kate was murdered another local woman was killed while walking her dog. Kate’s mom brought attention to it. There was a man seen talking to this victim in their 30’s and they were looking for a man in his 50’s that drove a white van. Maybe a serial?

According to devonlive.com, after this appeal on the 20th anniversary there was a surprisingly fruitful public response and they were able to generate 204 calls and messages. From these, they were able to identify 10 new significant lines of inquiry, which supposedly included the names of potential suspects. Detectives from the Major Crime Team examined the public messages in detail and reviewed up to 5,000 documents, including an in-depth look at 30 original witness statements. From the 10 new leads, a number of individuals named by the public were reviewed in significant detail by officers but eventually eliminated. So while this seemed really promising, we’re unfortunately back where we started, still not knowing what happened to Kate.

Paul Burgan’s statement about missing the last piece of the jigsaw puzzle still stands as we’re now more than 24 years out from Kate’s murder and it still hasn’t been solved. If you have any information about the murder of Kate Bushell, you can contact police at 101@dc.police.uk or by phone at 101 quoting Kate Bushell murder enquiry and ask for the information to be passed to HQ Major Incident Room. If you prefer to make a tip anonymously, you can contact crimestoppers at 0800 555111 or http://www.crimestoppers-uk.org. Crimestoppers is also offering a $10000 reward for information leading to the arrest and conviction of Kate’s killer.