Today we are talking about an infamous case from Germany in 1922, referred to as the Hinterkaifeck Murders. Its 20 year anniversary is actually on Thursday, so March 31. It’s a crazy one, so buckle up. 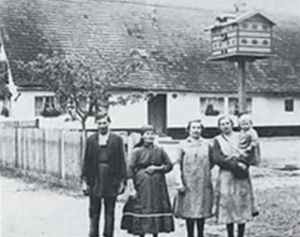 The farmstead belonged to a family known as the Grubers. Andreas (63) and Cazilia Gruber (72) lived there along with their daughter Viktoria Gabriel (35) and her 2 kids – 7 year old Cazilia and 2 year old Josef (pronunciation? Yo-sef). The family generally kept to themselves, but neighbors started to get concerned about the family when Cazilia started missing school, the family didn’t show up for church where Victoria was a part of the choir, and mail was piling up. They didn’t do anything at first though because they could still see chimney smoke indicating the family was there.
April 4th rolled around though and they decided it had been long enough that someone should probably check in on them. Lorenz Schlittenbauer, a nearby farmer, decided to lead a search party. They were obviously worried about the family, but they still weren’t expecting to find anything close to what they did.

Lorenz, Michael Poll, and Jakob Sigl discovered the barn door open where they then found 4 brutally attacked bodies covered with hay. Inside the house, they discovered two more bodies. Now, if you’re keeping track that means we have 6 bodies but there were only 5 family members. The sixth body was actually their maid, Maria Baumgartner who had literally just moved in – like the day the murders happened was her first day of work.

Sidenote: Michael and Jakob said that when they found the bodies, they thought Lorenz was suspicious because he seemed to be unnaturally calm and comfortable with moving and touching the bodies.

Let’s talk a little bit about the bodies. Like I said, there were four bodies found in the barn all covered with hay. These were Andreas, Viktoria, and both Cazilias. Andreas’ face was caked with blood and his cheekbones were protruding from his face. Viktoria’s skull was smashed, she had 9 star shaped wounds on her face, and the right side of her face had been hit with a blunt object. The elder Cazilia had signs of strangulation as well as at least 7 blows to the head and a cracked skull. The younger Cazilia’s lower jaw had been shattered and her face and neck were covered in gaping circular wounds. In addition to this, she was found with clumps of hair in her hands which led police to believe that she had survived the attack initially before dying hours later from shock.

The bodies inside the house were Josef, the two year old and Maria, the maid. Josef was in his cot and killed by a heavy blow to the face before being covered with one of his mother’s dresses. Maria was killed by crosswise blows to the head in her chambers before being covered with her sheets.
There was an extensive search for the murder weapon with the police even utilizing k9 units, but they didn’t find anything. A year later, the farm was torn down and a mattock that fit the description of what could have been used to kill the family was found. It was then identified by George Siegl, a farm hand that had helped out during harvest times. He explained that it was actually made by Andreas himself and had been kept with all other farm equipment in the toolshed.

It’s also important to note that in the months leading up to the massacre, Andreas had noticed some strange things around the farmstead. For one, he saw footprints leading from the woods towards the home, but none leading back to the woods. He mentioned this to some neighbors and also said that he thought he had heard some footsteps in the attic. In addition to the unexplained footsteps, he was missing keys, the lock to his toolbox had been messed with, and he found a newspaper that he had never purchased. Their previous maid had also heard voices and thought the house was haunted which led to her quitting. Knowing all of these things and what became of the family makes it pretty clear that something was going on, but it was a pretty safe and quiet town, so at the time Andreas thought it was just a couple of strange things and brushed it off.

Police later reached the conclusion that whoever had done this to the family had been secretly living in the house for more than six months before the townspeople found the family dead. This is because it had been six months since the previous maid who thought the house was haunted quit.
Not only did this individual secretly live there before the murders, but they may have continued living on the farm until the bodies were found too. If you remember, I said that the townspeople waited to check on them because there was still chimney smoke coming from the farmstead. This means that someone was tending the fire, but the family was already dead. They also ate the family’s food and did some tasks around the farm like feeding the animals and milking the cows.

Police initially thought it could have been vagrants or traveling men, but large sums of money were found around the house so they quickly eliminated this possibility.

So who could have done this? There are lots of suspects and possibilities, but to understand the reasoning behind each one we have to talk about some background stuff first.

Like I mentioned, other than the maid there were 5 people living at the farmstead that were all members of the same family. While it was a generally safe and quiet town, there was also a lot of stuff going on that didn’t first meet the eye.

Andreas, who was married to the elder Cazilia, owned the farm. We don’t know much about his wife, but Andreas had gotten into some trouble with his daughter Viktoria. Viktoria was living in the house with her parents because she had been widowed when her husband, Karl Gabriel, died in WWI a few years earlier. Karl was the younger Cazilia’s father, but wasn’t the father of Viktoria’s son, Josef. This is where it gets a little complicated. Viktoria had been seeing a man named Lorenz Schlittenbauer – if this name sounds familiar it’s because he is the one that led the search party for the family. He was widely believed to be Josef’s father, but he wasn’t too sure being as Viktoria and Andreas had previously been convicted of incest. In 1915, Andreas served a year for this and Viktoria served a month. Lorenz had also wanted to marry Viktoria, but Andreas stepped in and prevented the wedding from happening. Some sources say this is because Andreas wouldn’t allow it, but others say it’s because Lorenz found out about the incest and decided that he didn’t want to marry into that family. Because all this had happened and Viktoria was still living at her father’s farm, Lorenz wasn’t convinced that the incest between the two had stopped. He also thought that Josef could be Andreas’ baby and because of this didn’t really want anything to do with him and didn’t want to pay child support. It is said though that he eventually did accept paternity and paid the child support.

All right, now that we know more about the family, there are a lot of theories as to what happened, but no one was ever arrested for the murders because there was something to potentially disprove each one.

One of the first theories to come about was that Andreas had killed the family and then himself – classic murder suicide. He had a history of domestic violence allegations, so people around town didn’t think it would be too surprising if he had finally snapped. This theory was quickly eliminated though because once the autopsy was done, it was found to be impossible that any of the wounds had been self inflicted.
Another popular theory was that Karl Gabriel had actually survived the war and killed the family as an act of revenge. The people that believed this theory thought that he had taken another soldier’s identity and returned home as someone else after he found out about the incest. Ultimately this theory has also been dismissed though. This is because while there was no physical evidence of his death because he had been killed by a bomb, multiple of his comrades attested to him being killed in action and to seeing his body. 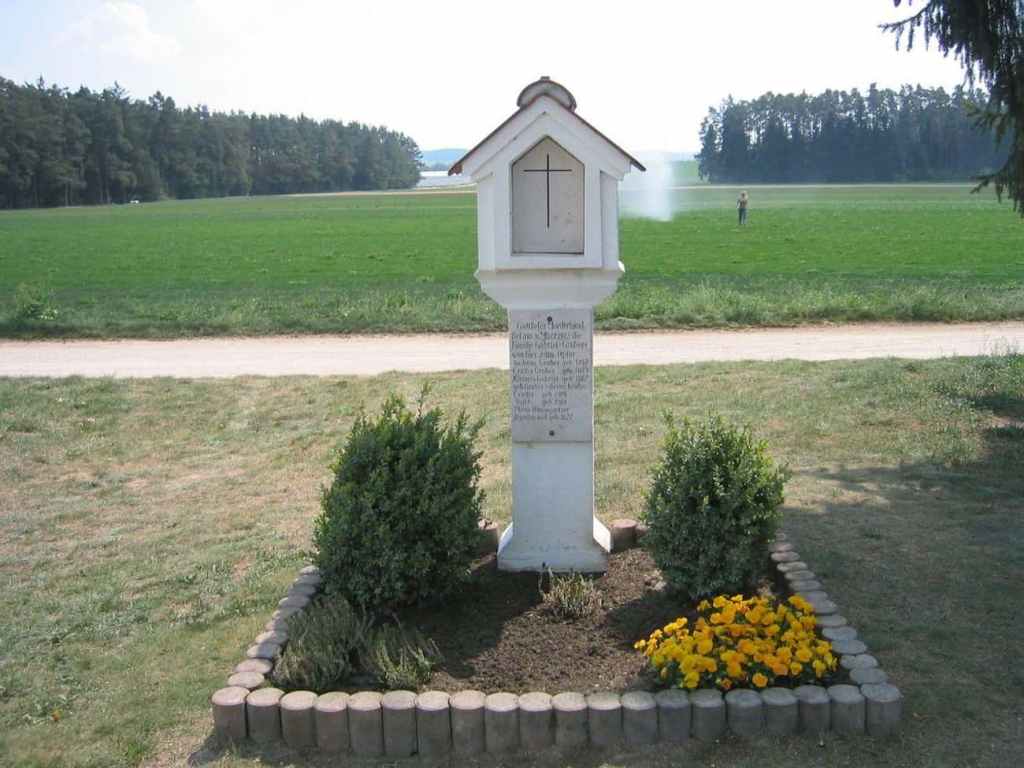 In 1923, just a year after the Gruber family and their maid were viciously murdered, Hinterkaifeck farm were razed and a memorial to the victims was put in its place. In addition to the simple concrete shrine, there is a memorial to the victims in the Waidhofen cemetery, where the Grubers and their housekeeper were laid to rest. (Source: Andreas Keller / Wikimedia / https://www.ranker.com/list/hinterkaifeck-farm/cat-mcauliffe)

The third and final theory I’m going to tell you about is that none other than Lorenz Schlittenbauer, Viktoria’s possible baby daddy and man who found the bodies could have done it. After Andreas stopped Lorenz from marrying Viktoria, he eventually got married to another woman and had a child with her. Unfortunately, this baby died when it was only a few weeks old – not long before the murders. This led police to theorize that a traumatized Lorenz had come to the farm and killed everyone. Police really honed in on him and questioned him extensively. They weren’t able to place him at the crime scene though and while a lot of things he did were viewed as suspicious, it was also determined that he wouldn’t have been physically capable of beating six people to death because he had asthma.

While all of these suspects were cleared, the police didn’t stop trying to figure out what happened. After the autopsies, the skulls were removed from the bodies and sent to clairvoyants in Munich where they were examined for metaphysical clues. Unfortunately this shot in the dark didn’t help the investigation and the skulls were actually lost during WWII. The bodies were buried without their heads where the now demolished farm used to be.
Another thing that makes solving this case 100 years later extra difficult is that some of the initial evidence gathered at the crime scene was also lost. What wasn’t lost has been said to be “too ancient” to give any additional information using more modern technology.

In 2007, the Furstenfeldbruck Police Academy investigated the cold case, but they were unable to conclusively identify the murderer. They did say though that they all agreed on a theory. Unfortunately, we don’t get to know what that theory is because out of respect for the family members of people related to the crime, they won’t release it.
Sources: