➢Born April 30, 1994 in Springfield, IL to Karen and Michael Laspisa

➢Was said to be charming a made friends easily

➢Grew up just outside of Chicago

➢After graduating, his parents who had just retired, decided to move to CA

Like I mentioned, Bryce had just graduated high school when they made they move, so it wasn’t long before he was picking a college. He settled on Sierra College, a community college about 7 hours away from where his parents would be.

I’ve heard some people speculate that this case begins with where he chose to go to college using the thought process of why would he choose a community college 7 hours away from his parents that just moved him basically across the country? People have said if he wanted a community college there were closer options and why move cross country with your parents just to then move 7 hours away and not be going somewhere friends from high school were. I see where they’re going with that, but I personally don’t think it’s relevant. It sounds to me like he had a pretty good relationship with his parents and probably wanted to be close enough that he could drive home every now and again, but not so close that they could just randomly pop in, ya know?

○Started dating a girl he met at school, Kim Sly

➢During summer break he was happy and told everyone (parents, friends, girlfriend) that he was excited to start Sophomore year

➢By all accounts he was still “fresh and eager”

➢They were noticing subtle changes in his behavior

○We’ll talk more about this in a sec

○As much as two fifths in a single weekend

➢It may help to increase the ability to pay attention, stay focused, and stop fidgeting

➢Over those first few weeks of school, Bryce was quickly increasing the amount of VyVanse he was taking

➢The once outgoing, well liked, friendly guy was starting to distance himself from everyone

○He said she’d be “better off” without him

➢He also texted Sean saying “I love you bro, seriously. You are the best person I’ve ever met. You saved my soul.”

➢Also on the 27 or 28, he gave Sean his Xbox and gave away a pair of diamond earrings that his mother had given him

➢Of course, these things sound pretty concerning to us, but they were all separate incidents and while Kim and Sean were obviously worried about him, they didn’t think much of these actions at the time 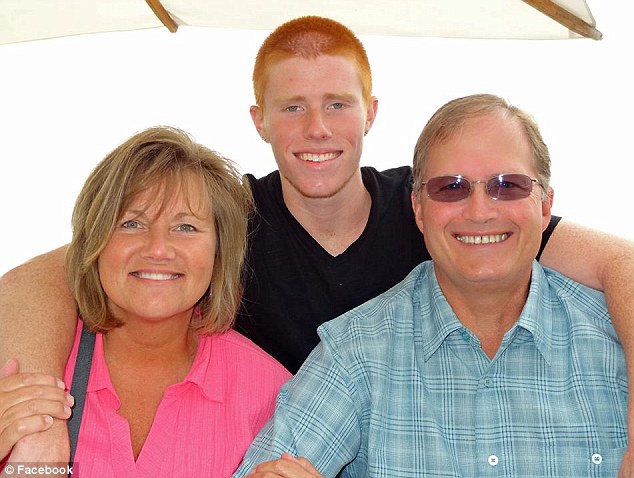 Bryce with his parents, Karen and Michael Laspisa (Source: https://www.dailymail.co.uk/news/article-2425453/Bryce-Laspisa-search-called-missing-teens-crashed-SUV-abandoned.html)

➢On the 28th, Sean called Karen (Bryce’s mom) because he was getting really worried about Bryce

○He sounded normal and not like he was compromised in any way, so Karen told Kim to go ahead and give him his keys so he could go home

Karen then offered to fly up to check on him, but he said not to come until after they talked the next day as he had “a lot to talk to you about.”

Bryce called his mom again at 1am, now August 29,  an hour and a half after he had left Kim’s. Like I mentioned before, her place was 90 miles from his, so his mom figured he was home and was calling from there to let her know he had made it home safely. She didn’t actually talk to him though as she missed the call.

What she didn’t know at the time was that he wasn’t home at all. In fact, his phone pinged about an hour south of Rocklin, where Sierra college is.

➢They called Bryce to make sure everything was ok, assuming he had maybe had some car trouble on the way back to his place from Kim’s

➢He wasn’t answering them, but they were able to get ahold of Sean who said he hadn’t come home the night before

➢They were able to get in contact with the repair shop that had responded to the roadside assistance request and spoke with the owner, Christian

➢This was the last anyone had seen Bryce, so Karen didn’t know what to do

So Christian goes to check out the place where he had left Christian hours earlier and saw the last thing he was expecting. Bryce was still in the exact spot he had left him.

➢Christian approached the car and Bryce seemed surprised to see him

➢He took the phone and Karen was rightfully concerned

○His voice was clear and he didn’t sound intoxicated

➢Hours later, Bryce still hasn’t shown up and it’s reached the point where the Laspisas decide to file a missing persons report

➢The officers reported that he seemed lucid and friendly, showed no signs of intoxication, and there weren’t any drugs or alcohol found in his vehicle 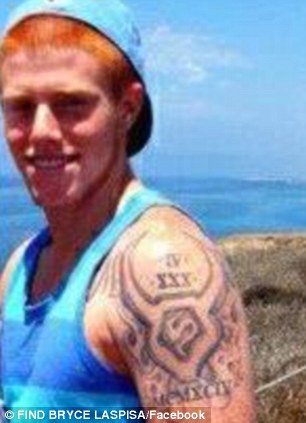 Bryce has a large tattoo on his left shoulder which could help identify him (Source: https://www.dailymail.co.uk/news/article-2425453/Bryce-Laspisa-search-called-missing-teens-crashed-SUV-abandoned.html)

➢The officers told Bryce that his parents were worried about him

➢Karen then told him he needed to come home

➢He ended up following Bryce on the freeway for a few miles to make sure he wasn’t doing the same thing as before and after about 30 minutes, when it seemed he was really on his way, Christian turned back

➢Knowing that he’s been up for quite a while now, she agrees and says she’ll see him in the morning

➢The rear window had been shattered

➢His phone, laptop, and other major belongings were found inside, but no sign of Bryce

➢No blood or signs of injury

➢According to a security camera, at 2:15 just minutes after talking to his parents, he’d turned onto an access road which went up a hill towards the Castaic Lake Recreation Area

➢Here’s where it gets really weird

➢2 hours later, he was seen on the same security camera driving in the same direction

➢Police found that the accelerator had been held down the entire time, so it’s looking like it was on purpose

Where did Bryce Go?

➢Dogs were also brought in and traced his scent to a place called Government Cove, but divers found no sign of him

➢On day 9 of the search, bloodhounds were able to trace his scent to a truck stop, but the trail seems to end there

➢The search was officially called off after 3 weeks

○Where would he have gone? No signs of his body

○There have been many suspected sightings of him, but none confirmed

○He has a pretty distinctive look

○Did he get out of the car fine and then have something bad happen to him afterward?

○Is everything we know wrong?

○What did he want to tell his mom about???

In 2015, the Laspisas conducted their own search of Castaic Lake with the help of professional investigators. Karen later told the Chicago Tribune, “We hired a sonar boat that searched for two days and did not find any human remains. Our private investigator had a drone operator searching the area north of the boat launch access road. Nothing was found.”

Detective Robert Martindale of the LAPD was the lead investigator on Bryce Laspisa’s case, and he believed that the teen decided to walk away from his life. 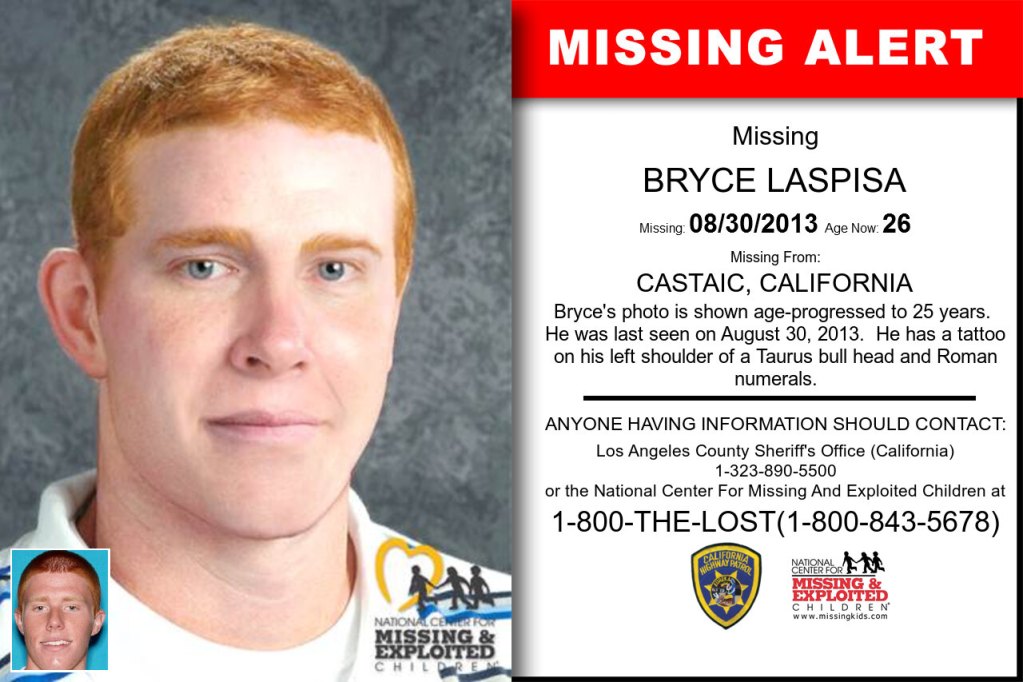