From Missing to Murder: The Disappearance of Caylee Anthony (Part 2)

FROM MISSING TO MURDER: THE DISAPPEARANCE OF CAYLEE ANTHONY 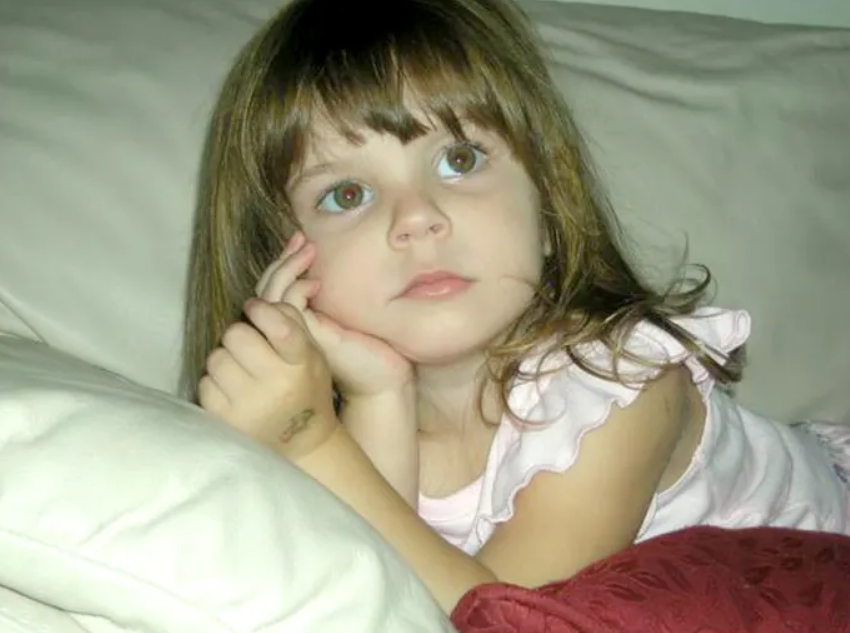 Oh What a Tangled Web We Weave…

Casey had spun a web of lies & deceit, but why lie about being employed at Universal? Technically, it wasn’t a lie, Casey did work there, but had been fired in 2006. She just decided to keep up the lie for years.

She didn’t even give in when detectives confronted her about the job, going so far as to take them to Universal, walk them around the campus, to a specific building on the lot, which she claimed was her office, then finally admitting to them she no longer worked there. One detective said to Casey, after finding out about the lie, “”If you continue down this path and continue lying, I can tell you that when this snowball gets to the bottom of the hill, the only person that’s going to get hurt then is you.”

After the repeated lies, and not giving detectives a clear answer as to the whereabouts of Caylee Anthony, Casey was arrested on July 16th, 2018. Detectives were wasting no time trying to get to the bottom of mystery behind the missing toddler.  She is charged with child neglect, lying to investigators and interfering with a criminal investigation.

On July 22, 2008, Casey is declared a ‘person of interest’ at her bond hearing It is also at this hearing, the Judge hears evidence that a cadaver dog had zeroed in on the odor of human decomposition in the car trunk, as well as the Anthonys’ backyard. This, in was addition to Cindy’s statement  that they hadn’t seen Caylee after June 9th. Despite the relatively minor charges, the judge is disturbed enough by the evidence and Casey’s indifference to finding her missing daughter, that her bail is set at $500,000.

On August 20th, 2008, with the hope of being able to convince Casey to help him find Caylee, California bounty hunter, Leonard Padilla, pays Casey’s bond & she is released to his custody.

It didn’t take long for Casey’s true colors to come out, and for Leonard Padilla to figure out he wasn’t going to have any more success in finding Caylee than detectives did. He concluded that Casey was narcissistic and promiscuous.

In all likelihood, Casey had just manipulated him, like she had everyone else, although the notoriety of the case probably didn’t hurt either.

Being out on bail didn’t last long for Casey, as her bond was rescinded on August 30th, 2008, after stealing & cashing checks from a friend.

On October 14th, even with no body having been found, Casey Anthony is charged with 1st degree murder of her daughter, Caylee. She is additionally charged with aggravated child abuse, aggravated manslaughter and four counts of providing false information to law enforcement.

Casey’s lawyer, Jose Baez, tells the media during a press conference: “I sincerely believe when we have finally spoken, everyone, and I mean everyone, will sit back and say, now I understand, that explains it.” 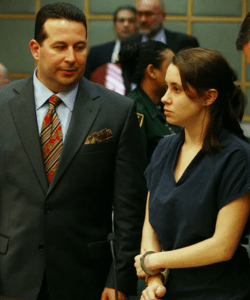 An Angel & a Monster:

On October 24th, 2008, forensic reports from an examination of Casey’s car are released, and the reports indicate that a hair strand discovered in the trunk is “microscopically similar” to those found on Caylee’s brush. Additionally, they showed “characteristics of apparent decomposition.” There was also an air sample from the trunk that was found to contain chemical compounds consistent with human decomposition.

These reports, despite not having a body to compare them to, were not far off by any means. As the mystery behind the disappearance of 3 yr old Caylee Anthony was about to come to a heartbreaking end.

On December 11, 2008, meter reader Roy Kronk found a plastic bag containing decomposed human remains in a wooded area, about ½ mi from the Anthonys’ home. On December 20th, 9 days later, it was confirmed that the remains found were that of Caylee Anthony.

The Orange County chief medical examiner concluded that the bones showed no evidence of trauma and that Caylee’s death was ruled a “homicide of undetermined means.”

Caylee’s skull was found with duct tape around the nose, mouth and jaw. According to testimony from an FBI forensics expert, latent print analyst Elizabeth Fontaine, there was the outline of a heart-shaped sticker found on the duct tape. The outline allegedly matched a sticker that was found near Caylee’s body and was “similar to a roll of heart-shaped stickers that police found in Casey Anthony’s bedroom.” This was according to a report from ABC News.

Though forensics experts weren’t able to actually prove that the sticker had been on the duct tape, prosecutors said it suggested a possible connection between Casey and her daughter’s death. As the prosecution’s theory of the case, was that Casey had killed Caylee by placing the duct tape over nose and mouth to suffocate her. And that there may have been chloroform used, as they found a search on the Anthony’s home computer about how to successfully use chloroform on a person. Side note, Casey’s mother, Cindy tried to later say that was her search, but detectives were able to disprove this as she was signed on to a computer at work at the time the chloroform search was done. Basically, Cindy’s claim was a lie & likely a cover-up for her daughter. Also, chloroform was found in the truck of the car Casey was using. The same car that smelled like a dead body, and was impounded. The advanced state of decomposition ultimately prevents investigators from pinpointing an exact cause and date of death. 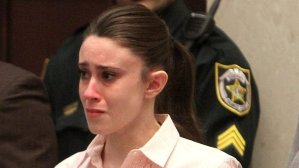 What Happened According to the Defense:

Anthony’s defense, led by Jose Baez, with co-attorney Cheney Mason working pro bono, told a very different story. According to the defense, Caylee had drowned in the family’s pool on June 16, 2008 and that George Anthony allegedly aided in the “disposal” of his granddaughter’s body to cover up the death, so Casey wouldn’t be charged with child neglect. Baez also claimed at trial, that George said to Casey, “Look what you’ve done! Your mother will never forgive you! And you will go to jail for child neglect for the rest of your freaking life!”

Baez also introduced during his opening statements that George had in fact sexually abused Anthony, beginning when she was 8 years old, and that her brother Lee had made sexual advances towards her as well. (In case anyone is wondering, a paternity test showed that neither Lee, nor George Anthony was Caylee’s father)

He said that Casey’s behavior after Caylee’s death was a coping mechanism developed after years of abuse at the hands of her father. “Casey did what she’s been doing all her life, or most of it, hiding her pain,” he said, per WFTV 9 ABC. “She went back to that deep, dark place called denial to pretend as if nothing was wrong.”

George Anthony vehemently denies all of the claims made about by the defense, and there is no evidence, besides Casey’s statements, to prove their validity. On June 30, the defense rested. Anthony herself did not take the stand. 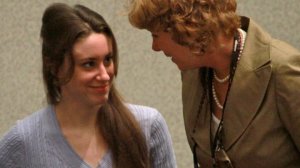 We the People Find the Defendant…

…Not Guilty. That’s right, you heard right. NOT GUILTY! Some say it was because the Prosecution’s case was not strong enough, some say it was because jurors believed Caylee’s death was truly an accident, that she did in fact drown, and the charge before them was 1st Degree Murder w/ the Death Penalty attached to it, which didn’t fit the narrative. Or, that members of the jury didn’t believe in the death penalty, or subjecting a young, white woman to it.

Whatever the reason, Casey was able escape justice & imprisonment. Years after the case, there was still information coming out about Casey, her lawyers, and crazy speculations.

One is that not having enough money to pay for her defense, Casey was forced by her attorney, Jose Baez, to engage in a sexual relationship with him. This news came to light after a private detective used by the defense in Casey’s trial, Dominic Casey, wrote an affidavit to that effect. Baez unequivocally denies the allegation. Allegedly also included in the affidavit, was that Casey did admit to the murder of her daughter, Caylee, to him. I suppose only Casey & Dominic know the truth to those allegations. 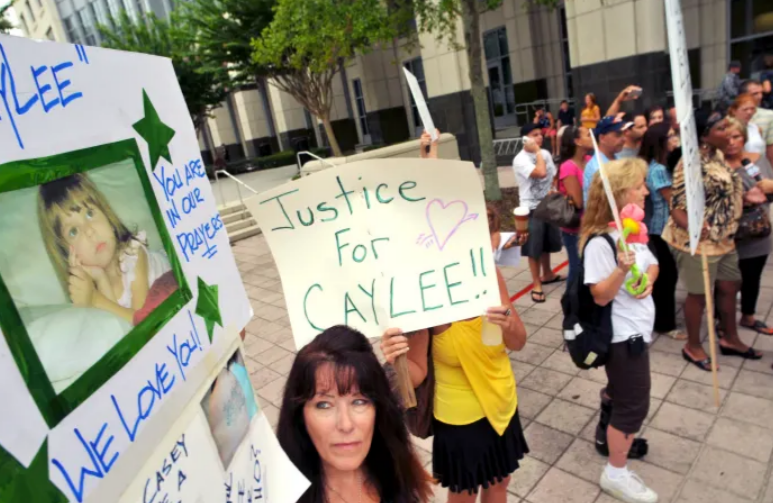 Protesters outside the Orange County Courthouse on July 7, 2011 (Source: https://www.biography.com/news/casey-anthony-muder-trial-timeline-facts)

Where is Casey Anthony Now?

In 2017, the Associated Press reported that Anthony was in South Florida, working for private investigator Patrick McKenna (with whom she also lived at the time) doing “online social media searches and other investigative work.” McKenna is a veteran investigator who served as the lead for not only Anthony’s defense team, but also that of OJ Simpson in his murder trial. In her rare interview with the AP, Anthony made it clear that she was passionate about her investigative work. “I love the fact that I have a unique perspective and I get a chance to do for other people what so many others have done for me,” she said.

Anthony also shared with the AP her goal of obtaining a private investigator’s license and working in criminal defense. Just three years later, according to the Associated Press, Anthony started her own PI firm, an LLC called Case Research & Consulting Services in 2020. According to the paperwork, which was filed with the Florida Division of Corporations in mid-December 2020, the company’s “effective date” was January 1, 2021, and the business address listed was none other than that of Anthony’s apparent live-in mentor, Patrick McKenna. 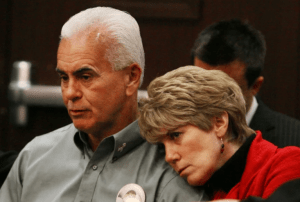 George and Cindy Anthony during a hearing for their daughter, Casey Anthony, at the Orange County Courthouse in Orlando, Florida on March 2, 2009 (Source: https://www.biography.com/news/casey-anthony-muder-trial-timeline-facts)

Casey’s parents, George and Cindy Anthony, also walked away from the verdict a bit shell-shocked. Not only did the couple lose their precious granddaughter, but they also had to make sense of their new normal following their daughter’s acquittal. From figuring out how to go about their relationships with Casey to finding peace with the trial’s outcome, George and Cindy’s lives were forever changed by the controversial case.

George supposedly came to the conclusion that Casey may have accidentally killed Caylee with chloroform, a belief he shared during an interview with Crime Watch Daily in October 2017, and again in a May 2018 in an interview with A&E. During this emotional interview, George said he’s convinced Casey gave Caylee “something to make her sleep,” and then the little girl never woke up.

As for Cindy, she doesn’t agree with George’s view. Cindy told Crime Watch Daily that she suspects Caylee accidentally drowned in the family’s swimming pool, much like the defense team’s version of events. Saying, “I truly, honestly don’t think she killed her…I don’t know if it was an accident or what happened. I don’t know if Casey got distracted and Caylee drowned in the pool.” 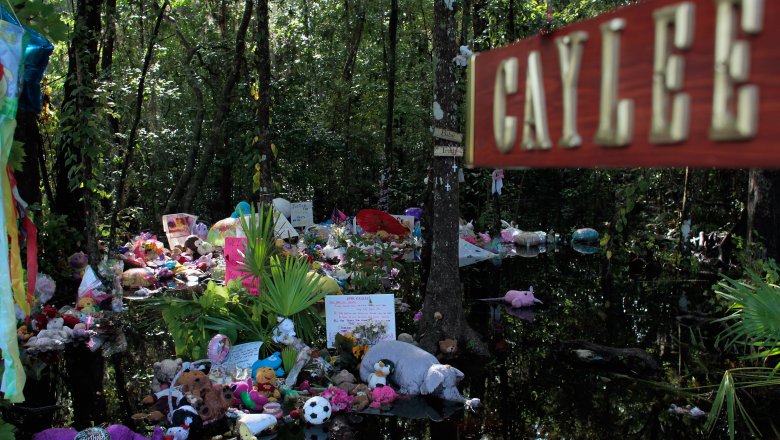 After arrest, Casey Anthony insisted her focus is on finding Caylee http://www.cnn.com/2011/CRIME/06/02/florida.casey.anthony.trial/index.html?hpt=ju_c1

The Death of Caylee Anthony: Untangling the Case That Ended in Casey Anthony Being Found Not Guilty https://www.eonline.com/news/845489/the-twisted-case-of-casey-anthony-sifting-through-the-evidence-and-lies-that-prevented-justice-for-2-year-old-caylee-anthony

What are the different kinds of manslaughter? https://www.sundancetv.com/shows/true-crime-story/episodes/season-1-indefensible-the-casey-anthony-episode–1060269

Casey Anthony ‘Is Getting Ready to Tell Her Truth’ in Upcoming TV Documentary, Says Friend https://people.com/crime/casey-anthony-is-getting-ready-to-tell-her-truth-says-friend-in-upcoming-documentary/

Casey Anthony Was Planning a ‘Racy and Explicit’ Movie, But It Was Scrapped Due to Coronavirus https://people.com/crime/casey-anthony-planning-racy-movie-scrapped/

The Most Bizarre Things About The Casey Anthony Case https://www.nickiswift.com/422514/the-most-bizarre-things-about-the-casey-anthony-case/?utm_campaign=clip